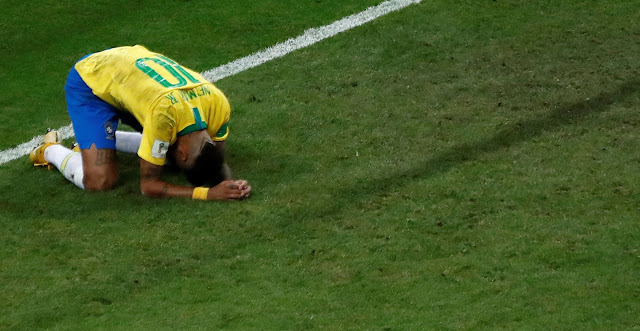 I think we often need to remind ourselves that players are humans, who have so much pressure placed on them as they perform in front of the entire world. And though they do their jobs in the spotlight, they have so much going on in their lives that we really know nothing about. We are witness to maybe 5% of it. We have no way of knowing what they are going through, what they are struggling with and how they feel. These pieces in the Players’ Tribune, that some people have been rolling their eyes at, are treasures in that they give us a glimpse into some of that. We realize that Di Maria hit such a breaking point that he needed to see a psychologist and that when he cried on the pitch it was because of his daughter. We find out that Paulinho’s wife was in hospital delaying her labor for weeks to fight for their children’s lives and gave birth prematurely while he was on Champions League duty in Greece, followed by the babies spending two months in an incubator. Or Bojan, after his once-promising career has dwindled into a series of struggling stints and faded into obscurity, does an interview shedding light on the crippling anxiety that paralyzed him from going to the Euro or living up to expectation. Or Valdes, after he’s retired, speaks out about the depression and bitterness that clouded much of his career. All of them while dealing with so much pressure and so much criticism and vitriol from us and the press. All of them, and many, many other players, pointing to points in their careers where they felt like they wanted to quit football. A sentiment I don’t think is out of place from any player in a moment of pain, of loss, of pressure, of struggle, whether personally, or professionally, or both. And this is no different for Neymar.

You could roll your eyes at Neymar for saying “This is the saddest moment of my career and it’s difficult to find the strength to want to play football again”; call him a diva and a drama queen, blast him for being dramatic. Or you could read his entire statement, notice that he appends it with “but I'm sure God will give me enough strength to face anything” and speaks of the dream only being interrupted, and leave him to process his pain.

I am not Brazilian, only someone who has been a Brazil fan for over a dozen years, and I have felt dead since yesterday over Brazil’s loss. Then think about Neymar, and what he has been through.

The history of Brazil and all the huge legends in whose footsteps he follows, all with careers defined by World Cup success, the pressure for him to follow suit. 2014, his World Cup, and Brazil’s, cut short by a gruesome tackle so dangerous that it could have paralyzed him and ended his career forever. The devastating 7-1 loss while he watches from a wheelchair. 4 years of waiting and working to get to the next one. 4 years of being the most fouled player in Europe, of opposition players continually hacking him down to stop him. A move to Paris and subsequent attacks and drama and false stories about him in the press, nonstop for an entire year. In a new city, separated from his son in Barcelona, endless scrutiny and criticism in the media, tension and turmoil at his new club. The World Cup approaching. Brazil rebuilt, refreshed, players at their peak, Neymar and Coutinho the stars, both the same age Ronaldo was when he led Brazil to glory in 2002 (they will be 30 by the time the next World Cup comes around). All the expectation in the world on them, their time if it’s ever going to be. Three months until the World Cup: Neymar suffers another bad injury. Has to have surgery and is sidelined again. Barely works his way back to fitness in time for the World Cup. Works on building up to his best match by match in the group stage, scoring, assisting, creating, pushing, all while still enduring endless fouls and being the most fouled player in the tournament. The nightmare of the 2014 tackle hanging there. Embellishes his fouls to try and get some protection/reaction from referees and not have the nightmare repeat itself; is made into the laughingstock of the World Cup. A horribly unlucky match against Belgium where Brazil push so much, create so much, Neymar equalling the record most chances created by a single player in a match this World Cup. Brazil falling just short at 2-1. It hurts more than something like a 7-1, when you come so close, when you know you could have done it, that 9 times out of 10 this is a match you win, that this was your biggest and best ever chance at the World Cup, this was it, and now, after such a difficult year and so much struggle to get here, it’s over.

To be in such a moment of crushing pain and say it’s difficult to think of playing again, is more than understandable. To those attacking him for being dramatic, I would ask you to contextualize a little bit and not be so reductive.

The worst part is that despite Neymar giving everything, with the numbers to back it up, and trying his hardest while coming back from injury and dealing with all the excessive fouling, while some of his other teammates gave much more disappointing performances, he is made to be the villain of Brazil’s loss, blamed and attacked.

Suddenly he is the first person ever to dive or embellish, he invented it, Mpabbe learned from him. All the other forms of cheating and deception players carry on with in every match, all match long – the dangerous fouls, calling for handballs and penalties when there are none, crowding and arguing with the referee, trying anything to get any call in their favor; all this we are fine with, and – particularly, bizarrely, in the case of the ugly fouls – even celebrate. But this one case of “cheating” in which a player’s own wellbeing is at stake, this inconsequential rolling around, that is the evil of all evils.

Really, this is a deeply twisted way for us to look at football.

And even in that match against Belgium, where he was still constantly fouled but barely spent any time on the ground and kept leaping up to go for it and push for his team, still all anyone could talk about during and after was Neymar the playacting diva.

He wins, he’s attacked. He loses, he’s attacked. He scores, he’s selfish. He doesn’t score, he’s a flop. He rolls around, he’s a joke. He gets up, he’s still a joke. He gets injured, he’s a wimp. He cries, we laugh at him. He posts what is really a mostly postive instagram message after his team has lost, he’s scrutinized a million ways up and down and lambasted as a drama queen.

It is absolutely true that Neymar has made some bad choices in his career and can be frustrating and annoying in his behavior. His move to PSG I do believe was a detriment to himself (as well as to Barca) and his attitude problems seem to have worsened from there. He is two days younger than me, and I am often acutely aware of this as I follow his career, and can’t tell you how many moments of “boy, you are the same age as me, you cannot be this immature” I have had. I wish he would embellish less and grow up more, of course.

But it's important to keep in mind, first, that many of the stories about him in the press are either extremely blown out of proportion, twisted around or entirely invented (such as claims that he asked for Barca to be suspended from the Champions League; or the spread of images from this interview in the media with captions saying he began crying when asked if he was happy in Paris, when the reality is that he got emotional over his coach Tite's words of praise and support). Second, that he has been put under an insane amount of scrutiny and attacks in the media, especially over the past year, on top of all the singular pressures and struggles he faces on and off the pitch. If he seems to act out or get very emotional at times, there is so much beneath the surface and we don't know what he's going through.

I can get so frustrated at his antics, moreso because I love him as a player, but more than anything I am just so saddened by how convoluted his career has become, how much of a ruthless media circus surrounds him, how it is obfuscating the joy and beauty of him as a player, and more than anything, how it is making people leap at him every time he breathes, and dismiss his human struggle.

To those criticizing him for being too dramatic while you simultaneously make a mountain out of every little thing he says or does: I would say the same to you, and ask you to have some empathy.