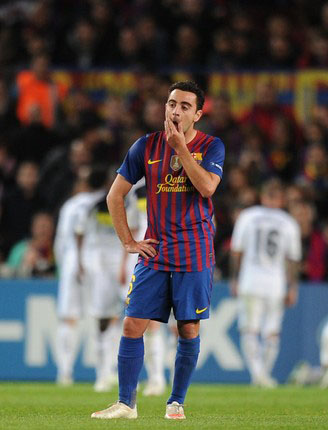 I don’t know about you, but just reading that makes me dizzy. It doesn’t stop at a loss. Or a tournament. Or even an entire season.

What this team has given us in the Guardiola era, what we have been extremely privileged to witness, to celebrate and to take pride in as supporters of this club, is far gone and beyond being incredible. There aren’t words for it. Our club has been, for over three years now, the best club on the planet and arguably the best of all time. That it has lasted this long is astonishing in itself. It was never going to last forever.

Not that I’m saying it’s over.

Because Barca is not invincible. These players have limits. And this is where those limits have caught up with them.

Barca has been playing the same way for four years now. The first three were teeming with success. This fourth one, not as much. So we start to lambast the style. It’s getting old, it’s been figured out, we need a plan B.

I see so many people criticize Guardiola and lament that Barca has had no plan B, but I don’t see any of them attempting to suggest exactly what this plan B should be. What style do you really expect, or want, Barca to play other than its own attacking, passing philosophy? The one that this club takes so much pride in, the one that the club took so much time and trouble to implement and develop, the only one that all the players who have and will come through this club’s academy are trained to play –  this academy that has been absolutely mind-blowing in its success at raising talent?

The evidence of the importance of this style and keeping true to it, and the fruit that it yields, is right there. We’ve been witnessing it firsthand for years. And this is why you have to look at the bigger picture, why you absolutely cannot stop now and say it needs to change. The thirteen trophies this club has won in the space of four years came about thanks to that style. Thirteen out of a possible eighteen, with a nineteenth still in play – it is too enormous a figure to let the two trophies recently let slip demand that we abandon the style.

Especially because you have to look at things from other angles. Or rather, from every angle. One is that no one can get everything right a hundred percent of the time. We can go back and talk about signings that shouldn’t have been made and ones that should have, players that shouldn’t have been sold and players that weren’t given the chances they deserved at the club, but in the end, most of this is acceptable. Because these mistakes will always happen, at every club and at every time. To expect otherwise is ridiculous. If you were looking for infallibility, you came to the wrong place.

Another is the physical condition of the team. The previous three seasons have been enormously successful, but they have also been enormously taxing. The more trophies the team wins the more trophies it gets to compete for, which means the more matches it has to play. This in turn means a huge toll on player fitness. Especially at a team like ours. Players like Messi, Xavi and Iniesta, players who are Barca’s heroes, are ones that at many other clubs would have been deemed too small and scrawny to be able to make it in the game, as they and their coaches have pointed out. This club’s advance to placing technique ahead of physicality has meant the rise of some fantastic players, but ones with lesser endurance.

Most of the team is small and injury prone. Several of them are getting old as well. All have been the victims of a horribly grueling match schedule. Before every Champions League draw Guardiola has only wished for Barca to be drawn against a team not too far way, as travel has always made the team suffer. This season moreso as Barca’s away form has been a far cry from their dominance of matches at home. Guardiola has resorted to having the team travel to away venues one or two days before, something they have never had to do before. And as the season is pulling to an end, the team is even tired at Camp Nou.

That is, those of them that are left.

They don’t just count for something. They count for something huge. This season in particular, the team has been fatigued and injury plagued to a drastic extent. Are we forgetting that at one point Barca had no more than thirteen fit first team players? That almost every time a player has returned from an injury, it’s only been for two others to be sidelined in his place? I doubt that at any point in the season Guardiola has even had the same squad to choose from for two weeks in a row.

It goes without saying that this applies everywhere else, not just last night’s match. Tito’s empty seat on the bench week after week, Guardiola losing his head and cursing on the pitch after Alexis picked up an umpteenth injury, Villa looking dazed in a wheelchair with his wrapped leg propped up before him, Abidal continuing to train with the team right up until he was hospitalized for surgery – these are the images that endure, and the ones that are most concerning. Seeing Abidal come out of his transplant all right is more important than seeing Xavi make the right pass or Messi make the right finish. The team has been through more than its share of pain this season, and things must be kept in perspective.

When it comes down to it, falling short in the two major competitions has had to do with the fact that the squad, although hugely talented, is small and fatigued to begin with and has further been chopped down into limited pieces of a puzzle that Guardiola has had to attempt to piece back together. Injuries have broken the squad both physically and mentally and Guardiola has been under the enormous burden of figuring out how to go on after that. Figuring out what is going to happen to the left flank without Abidal, and who can play at centerback when both centerbacks are injured, and how much can Xavi give anymore at the age and condition he’s in, and who is going to attack alongside Messi when Alexis is injured, and is it better to play Tello or Cuenca in their inexperience rather than start Pedro or Cesc in their dubious form? And on and on and on, I don’t have to tell you.

A lot of us like to think we know a lot about how all this should be done, about how to plug in the holes and who to play where, but the truth is that it isn’t simple at all. I, for one, would not have traded places with Pep for the world. And after the thirteen trophies he’s already led this team to in such a short space of time, I think he deserves from us all to trust and admit that he kinda, sorta knows what he’s doing. It’s an enormous task he’s had this season, more than any of the three previous ones, and frankly, I don’t see that he’s done too bad of a job with it.

We made it to the semi final of the Champions League for an all-time record fifth year in a row. We fought far and hard for the Liga. We’re in the final of the Copa Del Rey. And before any of this, we already picked up two Supercups at the beginning of the season and the Club World Cup in December. Not a bad season at all, and a far cry from one that demands for the club to discard its style and come up with a new one. After all, this style is what defines Barca and if we’re going to die, we’re going to die doing what we believe in.

Let’s not let the success of recent years blind us into a false sense of invincibility or entitlement. It’s a game. You win and you lose. This has been our turn to lose a little. We still have a hell of a lot to be proud of.
at 2:55 AM