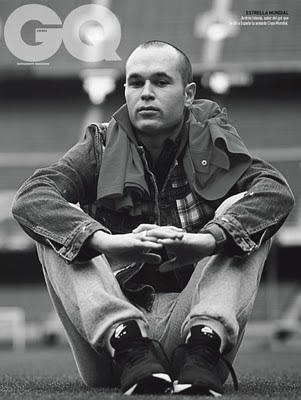 I suck at updating lately, but bear with me, my beautiful readers, soon enough I'll get things back on track and routine-ness shall resume. Right now, here's another post of randoms:

- The picture you see here is, obviously, Andres Iniesta on the cover of this month's GQ España for their special on "Los Héroes de España", that also featured photos of David Villa and Cesc Fabregas. Barca coverboys ftw!
- David Villa recently recorded a song with Spanish singer Ana Torroja for the upcoming "Together for Mali" album, and he sounds pretty damn good. Who knew KingSoulPatch was harboring this talent behind all his blitzy baller skills? Following the release of the album on the 23rd of November, a concert is set for December 2nd - and I am dying to know if Villa would possibly attend and perform the song live.
- The basketballing counterpart of our club is to host the 'Basketball Without Borders' event, with Barca Regal also set to face U.S. b-ball stars the Los Angeles Lakers. The natural result of all this is for the NBA's vice president of international operations Kim Bohuny to present Lionel Messi with his very own customized Lakers Jersey, with Lio lamenting that he'll have to miss the Regal-Lakers match (set for October 7) because he'll be with his national team as they prepare to play a friendly against Japan.
- An ad featuring Barca coach Pep Guardiola is tactfully placed right in front of Real Madrid's stadium, the Santiago Bernabeu; meanwhile Barca player Adriano recently had his car stolen and returned.
- And to cap things off: Barcelona just beat out Turkish club Galatasaray as the club with the most fans on facebook, with over 4.5 million fans. Viva Barca!
at 2:12 PM