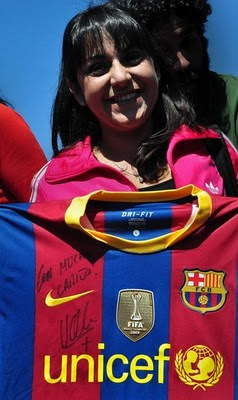 Hats off to David Villa for his support of a cause that is close to his heart: the thirty-three miners who have been trapped for a while now in a mine in Chile. Coming from a family of miners himself, with his loved ones have been in mining accidents, David is filled with compassion for the Chilean victims: "I form part of a mining family and I share the anguish of the families, but all will come out fine, they’ll see that it turns out okay. I would want to tell them that I’m with them, that all of us who know how the mine is are with them, that everyone is following them and supporting them, everywhere.”

Pictured here is Carolina Lobos, daughter of former footballer Franklin Lobos who is among the trapped miners, holding one of the signed shirts sent out by Villa on which he penned "support to you, miners, and much strength," as a gesture of solidarity with the thirty-three men.