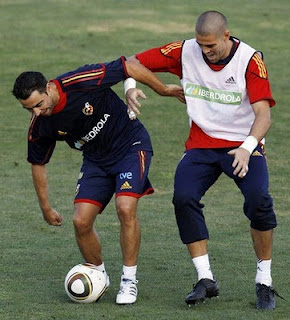 It's time for internationals again and as per usual, almost all the Barca boys are called up, with most of them facing off in the much awaited Spain - Argentina friendly.

Due to an injury in his left calf muscle, Puyol is left out of Spain's roster leaving his fellow countrymen Valdes, Pique, Busquets, Xavi, Iniesta, Villa and Pedro to represent Spain against their Barca teammates from the Argentine squad: Messi, Milito and Mascherano. The match is set for September 7th, before which Spain will face Lichenstein on September 3rd as they start qualifications for the upcoming Euro, of which they are currently title holders.

Barca is also represented in Spain's U-21 squad, as Bojan and Jeffren as well as B-teamers Miño and Thiago are called up to face Holland in qualifications for the U-21 European Championship.

Last but not least, Dani Alves joins the Brazilian national team for the upcoming friendly against none other than Barca's B-team. Now that should be interesting.
at 5:57 AM