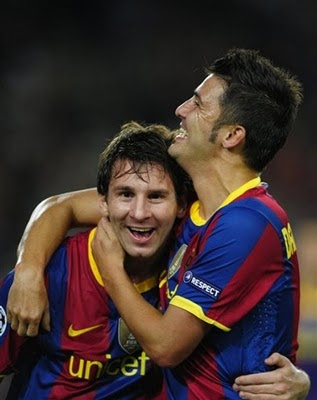 It's hard to believe that the Barca of last night is the same team that fell against Hercules on the weekend. Right now, Hercules seems like nothing but a distant, very hazy memory - that's what Barca can do to you with their brilliance.

From Lio Messi with his perky dashes in and around the penalty the box to Pique ambling down the pitch with his bandaged head, every last one of our players was totally there. All the bad positioning, blankness in front of goal and general slowness of the Hercules match had seemingly evaported, replaced with glorious movement and sharp finishing and beautiful passing. To think Villa only got offside once, and that in the begining of the match before the flow of things kicked in and then there was nothing short of perfection.

Barca managed a whopping 86% possession, and unlike the ball domination of the Hercules match this time it actually mattered. The unfortunate Greek side barely got a whiff of the ball, only getting a touch when defending (or trying to). Let's look at some more numbers: Barca had twenty-eight shots to Panathinaikos' one. Did you get that? Twenty-eight to one. Their one shot being the out-of-context goal Govou managed to grab off a counter-attack to open up the scoring; before Barca snatched back control and bombarded the opposition net with five of their own. Govou's name may be on the scoresheet, but his team's performance doesn't account for it. It was all Barca out there, from start to finish.

With the electric brilliance of Barca's game last night, that Panathinaikos should score first was utterly ridiculous - so much that our boys couldn't have the other team leading for more than a minute or two, not if Lionel Messi had anything to say about it. Who else to open up Barca's scoring but the marvel that is Lio? The goal came in the classic form of Xavi to Messi to net and it was game over for the Greeks from there. You could tell that Barca weren't done, not at all. They were just getting started.

Xavi was playing full-on playmaker, feeding chance after chance to our attack and it wasn't long before he set up Barca's second goal. His corner found Busquets ready to tap it on to Villa, and it was just too easy for KingSoulPatch to send the ball home and put Barca ahead.

Barca weren't going out of the half without having a firm grasp of their lead, and it was who else but Lio that made sure of that. He hit a few crossbars along the way before finally arriving at his second goal and Barca's third of the night, rendering us watching fans ecstatic.

While Messi and Villa took turns scoring, Pedro was struggling to get his name on the list as well. With each try from him it was more apparent how much he wanted it, and finally, as the second half kicked in, he found the net for the first time since last season, and I can only imagine what joy/relief that must have been for him. Lio Messi had had the chance to grab the fourth - and his third - before Pedro's goal, when he was awarded a penalty; but it was a rather sluggish shot on his part and the keeper bested him there.

Lio continued to push for a hattrick as the match drew to an end, but it was Dani Alves who capped off the night with Barca's fifth and final, in the very last minute of loss time. Converting a sharp header from Lio's assist, Dani took off on a victory run as the final whistle sounded amid the team's celebration, a perfect end to a perfect match.

This was rather reminiscent of the treble season, when Barca was regularly scoring five and six goals per match. Such a great result so early on in this season gives the feeling that it too could end in a truckload of silver; but, you know, we mustn't get ahead of oursleves. There's still a long journey ahead of us - but man will it be exciting. 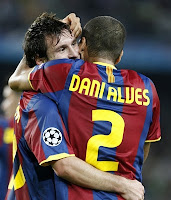 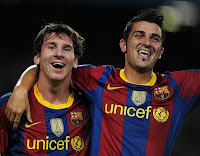 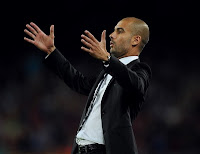 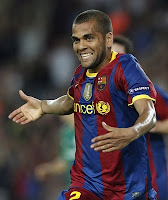 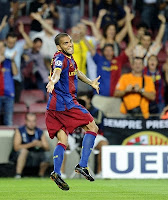 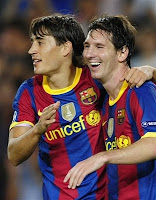 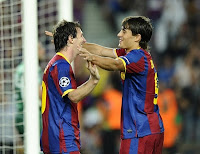 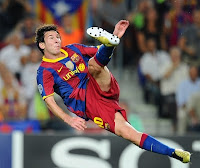 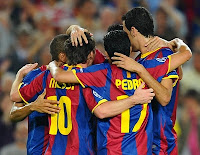