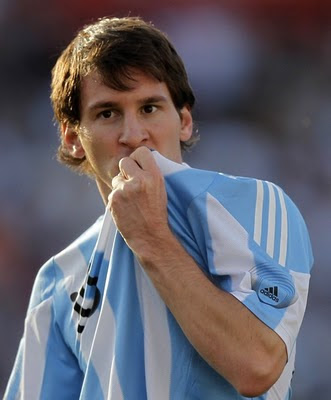 Hey-ho, the internationals are over and I'm back to report the shocking scorelines. We've got three matches to talk about:

Spain's opening qualifier for the Euro 2012 ended in a promising 4-0 triumph for La Roja, with Barca's David Villa netting the second goal. But Villa and company weren't as hot a few days later against Messi, Milito, Mascherano and rest of the Argies...
.
Man-of-the-match Lio Messi led his team to a 4-1 victory, scoring the second goal himself along the way, and I don't think anyone saw that coming - I certianly didn't. But Spain really did not show up for that match, and I don't just mean goalkeeper Pepe Riena with his fumble that cost his team their third concession.
Barca boys Dani Alves and Adriano joined the Brazil national team as they faced off against Barca B, and accordingly walked off with a 3-0 win. It certainly was a big event for the B-team, but I guess they can't have hoped to win against Menezes' Brazilian side.
And now that all that is done with, we can move past it (and, if you please, everything concerning Cesc's Barca heartache) and think about Barca's upcoming Liga match against newly promoted side Hercules FC.
at 3:20 PM