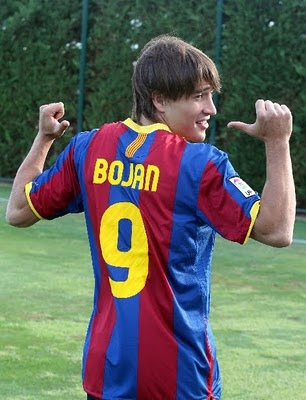 Time for a news round-up, and we'll kick it off with the most prominent issue of the moment: Bojan transitioning into the number 9 shirt, worn by Ibrahimovic and Eto'o before him (Jeffren is now wearing Bojan's former 11). Bless EMD and the photographer who took the glorious shoot (below) of him pulling his new shirt on bit by bit...
And speaking of transitioning, Barca's newest signing Javier Mascherano is transitioning well into the team, with his Argentine compatriots Lio Messi and Gabi Milito making sure of that. Arriving together from Argentina on Wednesday, the three continued straight to training at the Ciutat Esportiva and Lio and Gabi didn't leave Javier's side all through the session, with Gabi also acting as his spokesman.
Second keeper Jose Manuel Pinto has a new hairstyle: he's done his dark locks up in cornrows. I'm not quite sure where I stand in regard to the look, but the important thing is that he's happy with it: "My new haircut wasn't planned. I just went to the hairdresser and kind of picked it on the spot. I had it before, it's comfortable."
New studies show that Barca is the most popular club in Europe, with a pretty wide margin between them and the holders of second place, Real Madrid. Anyone else not surprised? Details and things here.
Our injured Captain Carles Puyol is pretty doubtful for the club's approaching Liga match against Hercules, but he's working hard on his recovery and was able to train along with the rest of the team yesterday. The only other sidelined player is Jeffren, who is still training apart from the rest.
. 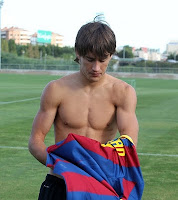 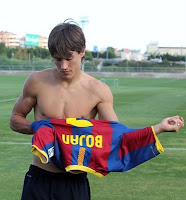 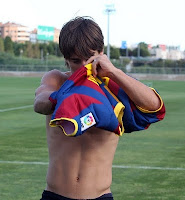 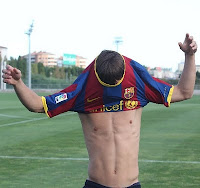 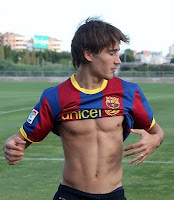