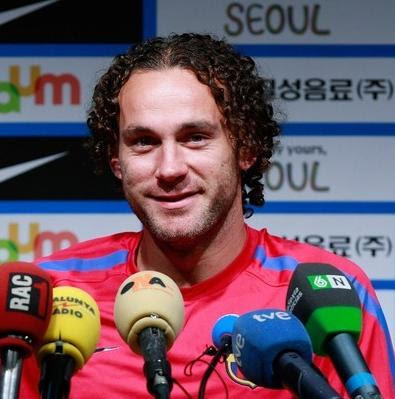 Gabriel Milito's birthday was yesterday and he turned thirty; best belated birthday wishes, Gabi! I'm sure it was a fabulous birthday seeing as his national team gave Spain a 4-1 thrashing on the special day; what better triumph is there than being the first team to beat the newly crowned world champions, and by a comfortable margin at that?

Having this curly-haired cherub of an Argentine on Barca is pretty awesome. I was missing him sorely during his over-a-year of injury absence, the prolonged period making his eventual return last season an even bigger joy without leaving him with much of a post-injury hangover. At thirty his game is still as hot as ever, with no signs of regression. Keep it up Gabi, I hope this season - set to be your first full season since the accursed injury - is as amazing as possible!
at 3:58 PM

Email ThisBlogThis!Share to TwitterShare to FacebookShare to Pinterest
Labels: Birthdays