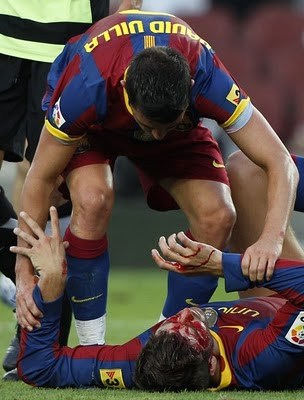 I'm posting this away from home for the weekend, in the absence of my usual sports channel or a connection that can support a stream - i.e. I wasn't able to watch last night's match, in the end settling for following it on my twitterfeed and ESPN gamecast. And maybe not watching it was a good thing after all...

Losing two to nothing in the first half of the season, to a team newly promoted and on the national day of Catalonia no less - it's grim any way you slice it. The fact that no one really saw this coming makes it even more dejecting, but I guess that should teach us to underestimated our opponents - even if they just came up from the second division.

Not having seen them I can't fairly judge how Barca played, but I'm going to take off from what other people are saying. Apparently the defense was awful, with the two concessions on them and not Valdes who was something of a bright spot in the scrambling lackluster side that was Barca last night. In Puyol's absence I would expect Pique to be fully able to lead the defense, but when he wasn't watering the pitch with his blood or screwing up sure chances, he was just lost, totally lost. As was most of the team.

Mascherano made his debut as a starter, and that was unexpected - isn't it like engraved in stone that debutants always come on as subs? But apparently Pep got that one right, because Masche was surprisingly integrated - as integrated as one can be into a team that is falling apart - with the rest, even if he was fouling a bit too much. Looks like he'll have a great future with Barca.

Skipping on to the attack: Messi had no eyes for his teammates and spent the night making pointless runs on his own, Bojan was on a coffee break somewhere and Villa worked extra hard to be in the wrong place all night. Looking at this game as well as previous ones, I have to say that he is getting caught offside way too much. Babe, do something about that, please.

Now let's cast a glance at the game stats. 77% possession, 17 shots with 9 on goal, and 14 corners among other set pieces. Shouldn't any team be able to get at least one past the keeper - that isn't revoked for offsides or foul - with those numbers? Very distressing.

This is more than curse of the international break. This is Barca flat-out not showing up with no excuses. Next up we start Champions League group stages against Panathinaikos, let's get ourselves together in time for it, if that's not too much to ask. 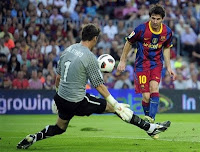 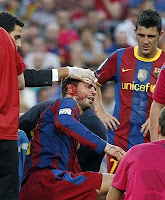 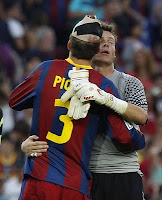 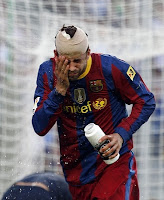