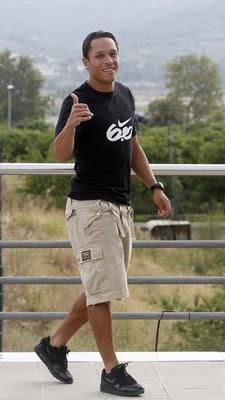 Here's Barca's newest signing Adriano looking fine and fresh as he and Andres Iniesta attended press conferences at the Joan Gamper sports complex in Barcelona. Andresito explained that he would welcome the transfer of German midfielder Metsut Ozil to Barcelona:

"I didn't know him at all before the tournament but, when I saw him play with Germany and given his age, I saw that he has quality and personality."
"Whether Ozil comes or not is not something I have any control over. If he comes, he will be welcome. If not, we'll just continue as we are."
As for Adriano, he expressed his eagerness to face his old team tomorrow as Barca meet Sevilla in the first leg of the Spanish SuperCup:
“I’m really looking forward to playing this match.”
“I’m delighted with my time with Sevilla and now I’m excited about going back."
He's confident in Barca's squad, but also warned that Sevilla will take the match very seriously:
"I don’t think the squad lacks depth. People always say that but the team wins titles. If we need a player we have the reserves where there are enough players to fill in if there is anyone missing."
"I don’t think Sevilla will hold anybody in reserve. They’re focussed on the match against Barça because it’s a final, a chance of a title. I’m sure Álvarez won’t reserve anyone." 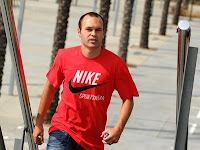