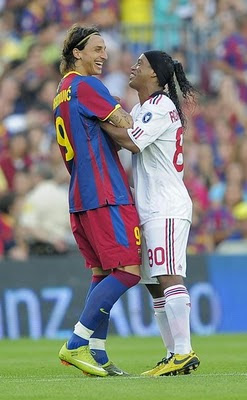 We all saw Galliani and Rosell avidly discussing oh-I-wonder-what-it-can-be during last night's match, then shaking hands on something at the end. We also noticed that Ibrahimovic disappeared at the final whistle, leaving his team to celebrate on their own. What can it all mean?

Milan have been quite blunt about their desire to get Ibrahimovic over to the San Siro, and Ibra seems to feel unwelcome bacause Pep has spoken to him "only twice in six months." As he explained: "I don't know the reason for this, but there are certainly problems. I asked him what the problem was but I didn't get a response."

Pep's answer to that is that there's a reason for everything: "If I have only spoken to him twice in the last six months, it is for a reason. There's always a reason for things. I'm super communicative and talked to him for 45 minutes. It was not a tense conversation. I have an open door. If we do not speak, sure there's a reason but now is not the time to talk about it. I insist."

Hinting that the problem with Ibra has more to do with his personality while denying that it is anything like Eto'o's case, Pep went on to say that the matter will be investigated to see what's on Ibra's mind and why he didn't join in the celebration.

Meanwhile, Rosell and Galliani are meeting for lunch today to discuss the matter further. The most likely scenario would be Ibrahimovic joining Milan on loan, with the two presidents currently bickering over who will pay how much of his salary.

Ibra's performance with Barca over the preseason has shown obvious improvement, but I just don't think there's enough room for him and Villa both on the team, and certainly not when Ibra's going to be grumpy about it. If he wants Milan and Milan want him, then it's probably in everyone's best interest that he does go. Barca will be more than fine without him.
at 5:12 AM