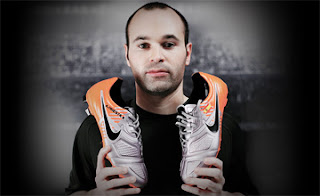 Andres Iniesta doesn't score frequently, but he does score valuably - there's got to be magic in the boots that netted the likes of his last-gasp equilizer against Chelsea that took Barca to the Champions League final in 2009, or the winning goal for Spain in the 2010 World Cup final.

We all know the story of how he gave gifted the boots from Stamford Bridge to raise money for the treatment of a boy with cerebral palsy, as well as the twist in that tale. So what about the boots from the final in South Africa?
.
As it turns out, they're going on display for all to see, as announced by Andres on his Facebook page: "These are the boots with which I fulfilled a childhood dream, to score in the World Cup final. They're a symbol for me and I want to share that with you. I have proposed that they be displayed so that anyone can go to see them and thus to thank you for your support."
The boots are currently exhibited in Madrid until the 3rd of September, then they'll be in Barcelona from the 6th of September till the 20th.
at 5:00 AM