Catching Up With Andresito & Busi 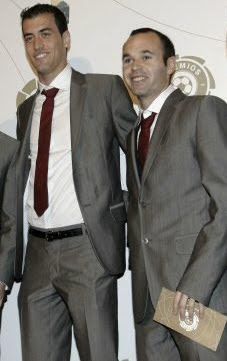 After the fashion of such players as Xavi and Cesc, Sergio Busquets is holding his own summer camp for kids where 105 youngsters are gathered to learn from the player, who has become quite celebrated in Spain following the World Cup. His Spanish teammates have taken to calling him ‘el Quitanieves’, or ‘the snow blower’, and ‘el Pulpo’, or the ‘the octopus’. And no, thankfully the latter has nothing to do with the overbuzzed creature called Paul, as Busi explains:

“They are affectionate nicknames that my teammates have given me these days in South Africa because they say that I have long legs and I get to all of the balls.”

Anyway, the camp is being held in the municipal of Badia del Vallès in Barcelona, and in Busi’s honor, the local stadium of second regional division side CD Badia del Vallès has been named “Campo Municipal Sergio Busquets Burgos.” And what an honor it is!

And Busquets isn’t the only one. Second league side Albacete Balompie, of the province of Albacete where Andres Iniesta lives (located in his home town of Fuentealbilla), will probably be naming their home stadium after him. It’ll go along great with the street he lives on, which already bears his name.

And speaking of the province of Albacete, remember last season when Iniesta sent his boots from Stamford Bridge, the very ones in which he scored the goal against Chelsea that took Barca to the Champions League final in 2009, to the family of a boy with cerebral palsy to help raise money for his treatment? The family earned €100,000 from raffling the shoes and collected on the cash, but the boots have yet to be delivered to the holder of the winning ticket. As posted by Isaiah on BFB:

"The boy’s family is sure that the winning ticket was sold in Hellín, Albacete, but even a trip to that town couldn’t turn up the winner, so the family tried to return the shoes to Iniesta, who said no, keep them and so the family is trying to figure out what to do now that their raffle didn’t work as planned. Damn, but Iniesta is classy."

Just wow. I mean, it really does seem as if Iniesta somehow rigged the raffle and paid for the boots while letting the kid keep them… he truly has outdone himself!
at 2:20 PM