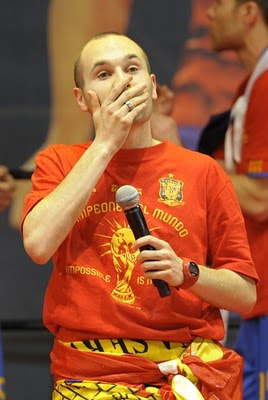 Following his wonder goal in the World Cup final, it doesn't look like the buzz about Iniesta will die down any time soon. And while its really awesome the way the world is celebrating him, it can get kind of... weird at times. And I'm not even talking about the fact that the artist Ber Stinco has written a whole song in his praise, the 'Sweet Iniesta'.

No, it gets crazier than that - apparently, Andresito is in Italy right now meeting with real estate agent Tom Barrack, who also owns French footie club Paris Saint-Germain. He's reported to want Iniesta to join them - as if - and then hopefully put him into the movie business.
And that has got to be the most ridiculous thing I've ever heard.
Link: Iniesta Flirting With Hollywood
at 2:10 PM