Lio In Fashion: Who Would Have Guessed? 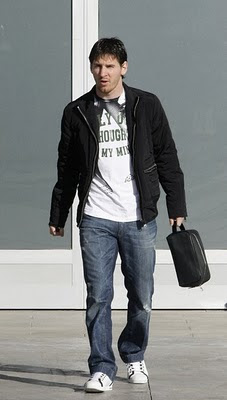 Today is one hell of a news day for Barca, with the rumours and reports just coming and coming. The issue at hand right now: Lio Messi's supposed fashion line. Initially it was reported just by The Sun, which lets me be skeptical, by now it's on Sport as well so, I guess it's really happening. Lio Messi, of all people, is sarting a fashion line.

I can't say it's not unexpected. I mean, if any Barca boy were to start his own clothing line I would have imagined it to be Pique or maybe Zlatan. Never Lio. What makes it even more bizarre is that his plan is to put together a fashion dream team of sorts, choosing a celebrity to be an ambassador of the line in every major city in the world. From Lio's tongue:
"I have been working on it for a few months."
"It would be me in Barcelona. We have approached Wayne (Rooney) for Manchester, Frank (Lampard) for London and Colin (Farell) for Dublin. We have spoken with Jay-Z for New York and the dream is to have David (Beckham) for LA. I already have Alessandro Nesta and Lupe Fiasco for Milan and Chicago."
"It will be high-end clothes and accessories for men. I'd like to open the initial shops by next summer. If we get all the names we are trying for, we can be the most famous and best men's fashion line in the world."
Lio Messi starting a revolutionary fashion line. Who would have guessed? It all sounds very exciting, and I'm wondering if Lio's girlfreind Antonella has anything to do with it. When we first heard about here it was said that she's studying nutrition, but sometime last year reports suggested that she's actually in fashion...
.
If anyone can clear that up, I'd appreciate it. By the way, Lio and Antonella are now in Cancun, Mexico for the remainder of Lio's vacation before he has to report in Barcelona at the end of the month along with the rest of Barca's World Cup participants.
at 5:08 AM