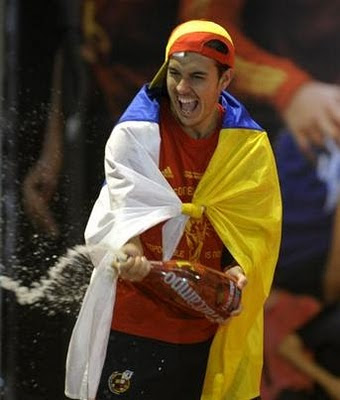 I must apologize for the lack of updates over the past couple of days, but I haven't had time and I hope everyone will understand that summertime is busy time, and I never know when I'm going to have the chance to get online... once my semester starts I'll be updating much more regularly, so bear with me until then.
To the point: Yesterday our beloved Prince Pedro turned twenty-three, and like Busi, he's on top of the world at that green age, and I'm talking on every level you can think of.
Internationally, he was called up to the Spain NT for the first time in his life to participate in the World Cup, played and started his share of the matches including the final, and was crowned world champion in the end.
Domestically, he finished his debut season with Barca as a starter and the second top scorer of the team behind Messi, scoring one of the most memorable goals of the season along the way.
Plus he's like, the cutest thing imaginable. His year has been perfect, so let's hope the coming ones are as great! (I would say better, but let's face it, there's no topping the World Cup). Best wishes to him!
at 4:30 AM

Email ThisBlogThis!Share to TwitterShare to FacebookShare to Pinterest
Labels: Birthdays