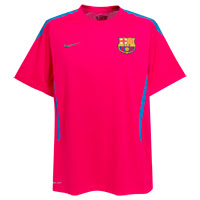 Barca's preseason training kicks off tomorrow, with an unpleasant surprise from Nike: the new training shirt has been unveiled, and in my opinion its the worst design yet. Well, not so much the actual design as the color - they call it 'voltage cherry', but that thing is downright fuschia.

We tolerated the neon yellow and orange training shirts before, but really? Fuschia training tops? Say what you will, I think that's just a bit too feminine for this footballing club. I mean, I'm sure Pique will love them, they'd go great with his infamous fuschia hightops, but seriously - what about El Capitan for example? Carles Puyol does not go with all things pink. Anyway, the thing is in stock if you'd care to order one.
Barca's twelve players who particapted in the World Cup are on an extended vacation, which leaves Pinto, Milito, Maxwell, Adriano, Keita, Jeffren, Ibrahimovic, Bojan, Henrique, Víctor Sánchez, Hleb (the last three returning from their respective loans) to show up for the training tomorrow, along with the seventeen youngsters called up from the B-team: Oier, Miño, Masip, Dalmau, Sergi Gómez, Armando, Fontàs, Muniesa, Martí Riverola, Ilie, Víctor Vázquez, Sergi Roberto, Jonathan dos Santos, Edu Oriol, Benja, Jonathan Soriano, Nolito.
First thing everybody gets to take a physical, and then Pep's grueling schedule begins: training every morning and evening to whip the boys back into shape after their lazy summers. Saturday is less intense with a single training session, and Sunday is the players' rest day. They also have to have dinner together as a team every night at the Ciutat Esportiva.
This is the plan until July 26th, before the team play their first friendly against Valerenga in Oslo on July 29th. After that those on international leave will return, and then I expect things will settle into a less crazy routine, with standard training sessions and team breakfasts as Pep has had for the past two seasons.
at 2:20 PM