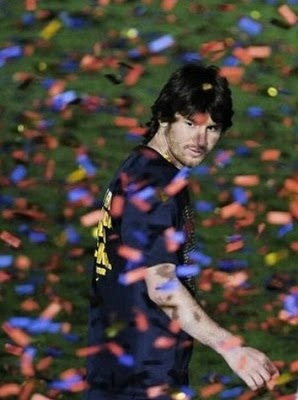 One thing the Spanish national team and Barcelona have in common, other than half their players, is their love for British band Kasabian. But Lionel Messi disagrees.

While the Spaniards drew inspiration from Kasabian's 'Club Foot' during the Wolrd Cup, Lio and the Argentines were listening to Oasis. Lio is crazy about them and even planned to bring the band back together to play at Argentina's celebrations should they have won the World Cup.

Now he's trying to get the Kasabian-loving Barca boys to share the Oasis love. In a move reminiscent of Iniesta's planned get-together with Kasabian, Lio has invited Oasis singer Noel Gallagher to come to the Clasico on Camp Nou in November.
.
It's all part of his grand scheme to convert the Barca boys: "Maybe Noel could give the boys a live set after training and they could see how great Oasis are," Lio suggested. "At the moment they refuse to listen to anything other than Kasabian."
In the midst of his plotting, Lio still respects the club Noel supports, Manchester City: "If my plan works, it will mean Oasis being played in the world's greatest football club - after Man City, of course!"
"We could also go for an Argentiniean steak at this great South American restaraunt in Barcelona."
.
Let us know how it all works out for you, okay Lio?
at 5:09 AM