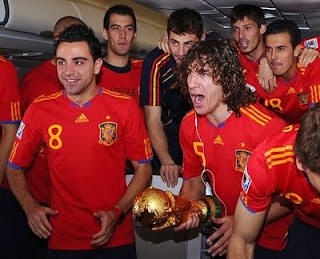 Carles Puyol has presented each of his Spanish teammates with one of his own watches, the CP5 (pictured below), either in honor of Spain’s historic World Cup victory or as a farewell gesture since he has officially retired from the national team after ninety caps. Winning the World Cup is a grand way to end his international career, but the Spanish team will surely miss him!
Xavi seems to think his teammate won't go through with it... we'll just have to wait and see, will Puyol have a change of heart the way Zlatan did?

Because Zlatan Ibrahimovic is doing just the opposite, by announcing that he’s decided to return to play for his national team. After Sweden failed to qualify for the World Cup, Zla claimed he had lost the motivation for playing with the squad; now though, he says he’s missed it and so made the decision to come back after several talks with new coach Eric Hamren. He’ll also be captaining the team, congrats!