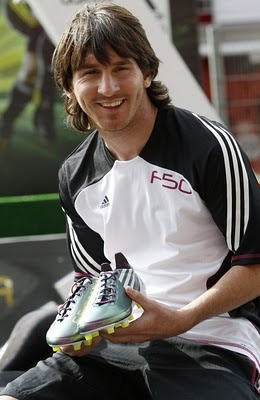 I think the combination of World Cup dissapoinment and too much sun is getting to Lionel Messi's head. He's been acting very strange lately, and I'm not just talking about things like starting a breakthrough fashion line. It's this Oasis obsession he has... I think he just crossed the line with it.

The basic story is that Carlos Tevez got to know the band while he played in Manchester and introduced them to Lio, who fell in love instantly; then the entire Argentine NT got caught up in the Oasis love and listened to them throughout the World Cup.
.
Things started to get a little unuasal when Lio decided he would do the impossible to bring the broken-up band back together to have them play at Argentina's celebrations if they won the World Cup.
That obviously didn't work out, so he invited band member Noel Gallagher to the upcoming Clasico. He wants to try and convert the Barca boys, who love Kasabian as Spain does, to Oasis. Okay, nothing too strange about that.
But if the latest reports are true, it seems that Lio's obsession with Oasis is getting to be like Barca's obsession with Cesc: out of hand.
He's said to be forming a mock-fan-tribute band for Oasis, where he plays Noel Gallagher and another Barca player will play Liam. Lio won't say who, but I'm going to take a timid guess and say Dani Alves.
I don't think I've ever heard anything so bizarre. I'll just leave you with what Lio was quoted as saying:
"Our disguise is based on how Oasis looked in the mid-90s. We have our wigs, clothes and glasses sorted."
"I also spent a lot of time getting the mannerisms right."
.
"We'll visit the UK. If you're at a pub or club where we are performing and see past our disguises there'll be a decent prize in it for you."
I think I need to lie down.
at 4:16 AM