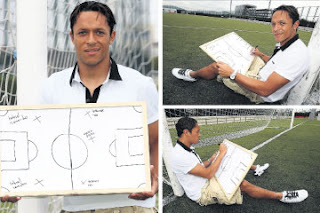 Barca's new signing Adriano sketched out for Pep the five positions he can play: in defense as a left or right winger, in midfield, inside left or inside right, and as an attacking midfielder. Any of that he can comfortably do, although the left side of the pitch is his preference.

Adriano's adapting to his new life in Barcelona pretty well, getting along great on the team and with Pep, who he claims is 'like a father'. He's especially glad to be playing alongside his former Sevilla teammate and fellow Brazilian Dani Alves, although he claims that he more tame than Dani when it comes to dressing room jokes.

Adriano's loving life in the city of Barcelona itself, but he's wary of the cold winters. Also, although he can speak Spanish well after five years on Sevilla, now that he's on Barca he's going to start taking lessons in Catalan right away.

Asked where he'll be staying, Adriano said he'd like to find a home by the sea or in Gavà by Pedralbes. For now, he's in the Hotel Princesa Sofia near the Camp Nou. He also proudly showed off the tattoo on his wrist (picture below) which is the letters 'A.M.A' that stand for the names of himself, his wife Manuella and his son Adrian.