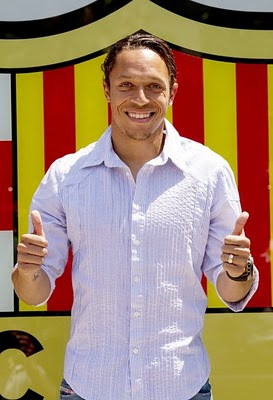 Adriano's a Barca player, it's official! He arrived in Barcelona today and signed his four-year contract with the club – which includes the option for a fifth year as well as a 90 million euro buy-out clause – but not before stopping to pose for pictures in front of the club’s crest, as per usual with new signings.
What isn’t usual is the club president meeting him out there and posing with him – I’ve covered enough transfers to know that it’s usually just the player alone with the crest. Then again, this is Rosell’s first signing since he became president; and it’s a pretty great signing to start off with, if you ask me! Adriano looks so great here too, I’m loving the longer hair on him after the short-cropped look he’d been sporting in the past.
The player left Sevilla in tears, which as I recall is the same way Dani Alves left that club when he signed for Barca two years ago. What is it about the Andalusian team that makes players so attached? Anyway, Adriano, who will wear the number 21 (previously occupied by Chygrynskiy), will have his press conference and presentation on Monday, although the doors of Camp Nou will be closed during the event since the stadium is undergoing construction work. Does that mean no fans to greet the new signing? That kind of sucks. 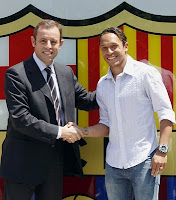