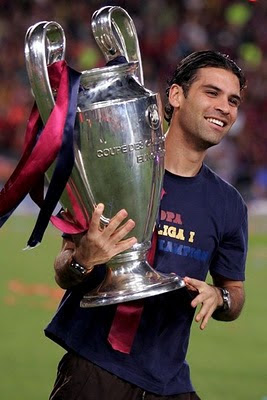 So I'm gone all day on a family outing, oblivious to the fact that an hour after I did the previous post and got offline, Rafael Marquez's departure from Barca was officially announced. It was all over my twitter homepage when I opened it later that night, and although I knew it was coming, I can't help but be just a little bit heartbroken.

Well, I'll keep it short. He and the club came to a mutual agreement to rescind his contract, which would have been good for two more years. I can be glad about the fact that Rafa went willingly and wasn't outed the way Eto'o was, but I had hoped he'd retire on the club. I thought he would when his contract was renewed last season. But I guess this is good for him, he'll be playing much more on another club than if he'd stayed with Barca.

Rafa gave a press conference where he affirmed his love for the club and his satisfaction with his time here, saying that he'll be a Barca fan till he dies. Then he stopped by training yesterday to bid farewell to the team, photos here. It's too bad Barca's Spaniards couldn't be there, but Dani Alves was, fresh from his vacation, and even in the midst of my sadness over Rafa's departure I couldn't not notice how awesome Dani's outfit was.

Later that day his public farewell was held in the Sala Paris in Camp Nou (the chamber of Barca's 2006 Champions League victory in Paris), which is a fitting location since Rafa says that that is his best memory with the club. President Sandro Rossel, coach Pep Guardiola, and team Captain Carles Puyol where among those present, and Rafa was presented with a commemorative plaque and recieved a long standing ovation.

Goodbye and infinite thanks for everything, Rafa. You and your hair have been inspirational to me for years, and of all the players who have departed from Barca, you are so far the only one I love enough to continue stalking even after you've left the club.
.
Edit: Actually, I still stalk Deco from time to time too. Damn, I miss that guy.
at 4:29 PM