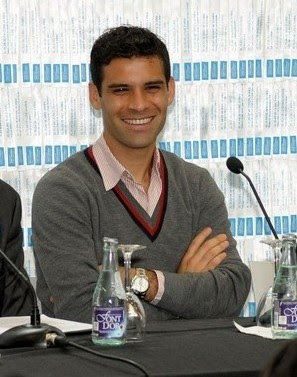 I've been hoping against hope that this wouldn't go through, but it looks like there's no use denying the matter any longer. Rafael Marquez is leaving Barcelona.

It's heartbreaking news for me because Rafa is one of my favorite players ever, and I don't think he deserves to be dispatched at this time. Yes, he's had some bad games and made some mistakes during the past couple of years, but as last season progressed he was playing better and in my opinion, wasn't given enough minutes to prove he's still good enough for this team. Not to mention he's one of the best set-piece takers ever (it sucks that Barca didn't take advantage of that and he wasn't put up to the plate very often). And why did the club go out of their way to renew his contract last season if they didn't want him to stay?
But what's done is done, and Rafa is off to join Thierry Henry at the New York Red Bulls. I hope he has a great run there!
at 1:50 AM