Another Day, Another Charity Match For Lio 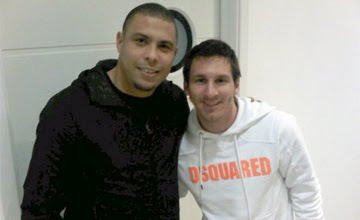 Lionel Messi is hopping from country to country and charity match to charity match, today turning up in Brazil to participate in the goodwill game organized by none other than ex-Barca hottie, Deco. Lio played on Deco's side against a 'rest of the world' team, coming off ten minutes into the second half of the match that finally ended at 3-3. Lio also stopped by to see Brazilian star Ronaldo, and went up against the veteran in a ping-pong match in which he was victorious.
Proceeds of the charity match, which took place in the city of Indaiatuba, go to Deco's own nonprofit organization that promotes the social inclusion of underprivileged children through educational, sport and cultural projects.