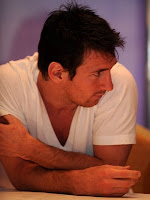 Here's Messi looking hot at a press conference in Panama, where two days ago he took part in a charity match unremarkably titled “Lio Messi and his friends against the world.” He played on a team alongside his Barca mate Gabi Milito among other stars, against a rival side that included ex-Barca boy, Deco. It was a golden game for the Argentine hero: he scored in less than five minutes after the starting whistle, before going on to complete a hattrick as his team won 6-4, and wore a smile as he left the field to a standing ovation.

Yesterday he was out again in Port-au-Prince, Haiti as a UNICEF goodwill ambassador to visit one of the refugee camps, and had to be escorted by bodyguards as thousands of Haitians flocked to catch a glimpse of the Argentine superstar.
.