Randoms: Villa & His Girls In Ibiza 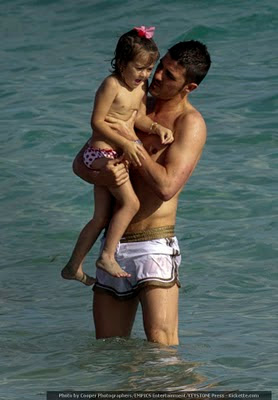 - Check out David Villa and his radical shorts at the beach with his wife and daughters in Ibiza. Spanish keeper Pepe Reina is there with his family as well.
.
- Barca's World Cup winning Spaniards aren't due back on the team till August 9, but Pique and Puyol decided to drop by training in Barcelona to see the squad before they take off for Norway today.
- In case you were wondering, Cesc, who was with Pique in Ibiza, would continue his vacation in Greece according to some reports, or go back to London to yell at Wenger and force his Arsenal exit accoriding to others. Take your pick.
- Spain isn't done celebrating Andres Iniesta. He's set to be named the adopted son of Albacete, as the city pays tribute to him in an event tomorrow that includes him meeting with regional president José María Barreda. He'll also recieve the title 'Ambassador of the Fair and Bright Badge of Albacete Balompié', and accept the Gold Medal of the City of Fuentealbilla. Rock on, Andresito!
- Andoni Zubizaretta, the legendary goalkeeper of Barca, will be presented today as the club's new sports director, taking the place of Txiki Begeristain.
at 5:30 AM