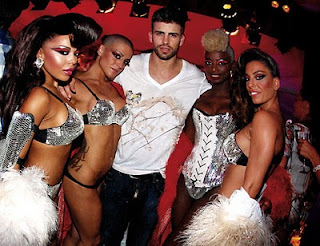 The vacation round-up isn't over yet! Barca's World Cup participants are still out there, and I never get tired of stalking Pique, who, judging by this photo, is having one hell of a time in Ibiza! He's still out there with Cesc and they've been spotted all over the island: out on the water in their rented yacht, partying in the famous Pacha nightclub, and watching the brilliant sunsets of Ses Variades... at the bottom are the photos of the two on the beach, and here's a video of Pique having a drink: 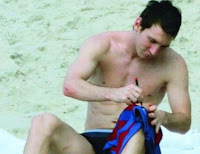 Moving on: Lionel Messi is still in Mexico, on the Riviera Maya, with his girl Antonella. He's there to relax, but even while kicking back on the beach (and practicing an unreal immunity to the sun) he's signing autographs. Lio as well as Dani Alves are due to catch up with the squad at the end of this month to join them for the Asian tour, while Eric Abidal showed up today, earlier than he was expected. The Spaniard champions will be back August 9. 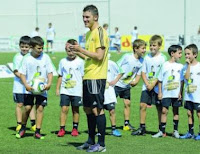 And speaking of Spaniards, here's David Villa with the kids at his summer camp in Langreo, which just came to an end. He's due for questioning about that haircut once he's back with the team, but for now he has taken off for Ibiza with his family, to kick back during the last days of his vacation and hopefully save Gerard and Cesc from themselves.
.