The Hero Does Not Rest 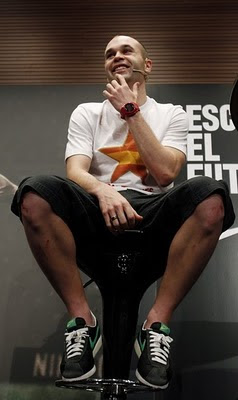 Iniesta's name is the one on every tongue these days, and the man himself is being kept very busy. Sunday he's scoring the most decisive goal of his career and winning the World Cup with Spain; Monday he's arriving in Madrid with the rest of the national team to an incredible welcome from the fans, not to mention meeting with the royal family; Tuesday, its straight to Barcelona for a press conference. Spain's hero is totally casual in all his scar-kneed glory, showing up in a Nike 'CAMPEONES DEL MUNDO' tee and skater shorts.

He talked about everything under the sun: the pricelessness of the joy of the Spanish people; his desire to win more titles with Barca; how Cesc would bring the club a 'tremendous leap in quality' were he to join. Well, he's got that right!
But back to those scars. Would you look at his knees, his calves? The World Cup has really left him battered. I didn't fail to notice that he was getting kicked around alot throughout the tournament, and it totally sucks when players resort to that kind of thing. He was out with injury for too much of last season, hopefully we won't see a repeat.
.
UPDATE: Looks like Iniesta is up to some wild tricks as well - reportedly, he's planning a rockin' night out with British band Kasabian!
. 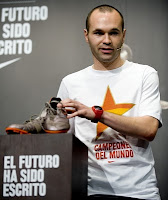 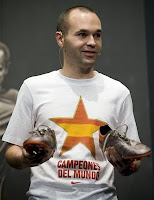