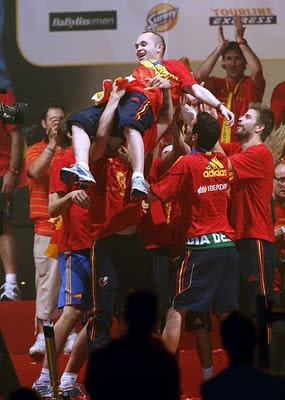 Can’t believe I’m finally back and blogging, and what better way to kick things off than with a Blaugrana World Cup wrap? First order of business: Congratulations to Valdes, Pique, Puyol, Busquets, Xavi, Iniesta, Pedro and Villa, who return to the club as World Champions! Yes, Valdes regrettably got no minutes in the tournament, and yes, Villa hasn’t yet debuted for Barca, but I’m equally thrilled for every one of them.

Also, well done to the rest of the Barca boys who participated in the World Cup, for their efforts and achievements with their teams. There can only be one winner, but everyone gets credit for trying! Dani Alves with Brazil as well as Leo Messi with Argentina all made it to the quarter finals; Rafa Marquez also captained Mexico to reach the last sixteen. Things weren’t as bright for Thierry Henry and Eric Abidal, with France leaving the tournament after just the group stages, and the same goes for Yaya Toure and his team, Ivory Coast (I know, I know, he’s gone to City, but he was a still Barca boy during his time in the tournament).

That said, let’s get back to the returning champions. It’s lucky number eight!

- EIGHT is the number of Barca players on the Spanish squad that were just crowned World champions – that’s almost a whole lineup!
- In their first ever World Cup final, Spain have become the EIGHTH team to ever win the tournament (the others being Uruguay, Brazil, Argentina, Germany, France, England, Italy).
- EIGHT is the number of goals scored by Spain during the tournament, and coincidentally, all were scored by Barca players! (1 for Puyol, 2 for Iniesta, 5 for Villa)
- Iniesta scored the decisive goal in the final that clinched the title for Spain, and though he wears the number six on the national team, on Barca he’s the proud bearer of the number EIGHT (Xavi and Iniesta, the dynamic midfield duo, wear reversed numbers on Barca and Spain – with the club Xavi is 6 and Iniesta is 8, while with the country it’s the other way around!)

… eight Barca players on the Spanish squad, eight returning champions for Barcelona. It’s a big number. The Spanish lineup was easily dominated by Barca boys throughout the tournament, and at times it felt like watching Barca, with Villa more or less playing the indispensable Messi role. Which makes it that much more exciting that Villa is now a Barca player. He clicked perfectly with the Barca boys on the Spanish squad (that incredible pass from Xavi that led to Villa’s goal against Paraguay is a great example of how well they can work together) and starts his era on the club in high spirits as a World champion, not to mention Spain’s best player and top scorer in the tournament – we are certainly in for one hell of a season!
at 3:55 PM