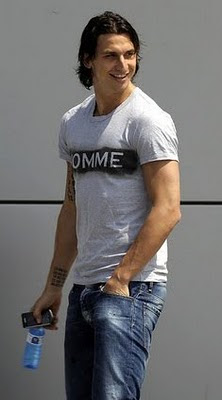 Now that the World Cup has ended, summer transfers claim the focus of the footballing world, and so comes my first ramble for this transfer window. In a club where buying transactions can take ages to be completed (or take ages and not be completed), I'm impressed that Villa was signed and sealed before the Cup even began. Then again, we had a whole summer of madness concerning him a year ago leading up to this. Still and all, I for one am relieved that Barca finally signed him.

There's a poll on this blog on the sidebar to right, and I always vote on my own polls. On this one, my choice was option three. It's no secret that I was against the signing of Ibrahimovic right from the start - I blogged about it time and again in the days before it was confirmed, hoping against hope that it wouldn't go through; but in the end it did, and there was nothing left to do but grin and bear it. Its not that I ever had anything against Ibrahimovic himself, but simply that I felt - and still feel - that he's not the type of player who would fit in at our club. I was willing to wait and see how he would do, and I don't think it can be said that he lived up to expectations, especially considering the price we paid for him.

It frustrated me that the club saw Ibrahimovic as a better option than Villa, and turned around and struck up the deal with Inter out of the blue after back-and-forth talks with Villa and his club all summer long. The fact that Villa was signed so quickly now and that Ibrahimovic will possibly be sold shows obvious regret on the club's part. Yes, I'm thrilled that Villa is finally here, but it comes a year late.

I try not to imagine how much better last season would have been had it been Villa and not Ibra on the team, because it doesn't do much good and besides, although a step-down from the historic treble, last season was still pretty amazing, as is winning the Liga for the second time running. Just, with Villa it would have been more, I'm convinced of that. But setting all that aside, can anyone overlook the financial loss to the club because of this whole striker issue?

Not only did the club trade Samuel Goal-Machine Eto'o to obtain Ibra, but on top of that they put 42 million euros, potentially the price of a whole other striker. What we gave for Ibra was so ridiculous that I actually had a moment where I felt like I was supporting Real Madrid. Yes, the transfer was that horrible to me.

Seeing as Ibra was about half as good as he should have been, and we paid double what we should have to get him, that means our benefit from him was really worth like a quarter of what we paid. And then the club lays down another 40 million for Villa to make up for the mess, only that doesn't really make up for it. Valuing Eto'o at forty million, plus the other forty-two, minus the 20 million I say Ibra was really worth for last season's performance, that makes it around a 62 million loss on the player, and that, in case you’re wondering, is no small sum. So unless we can sell Ibra now for sixty million euros (I wouldn't bet on it) this whole striker affair was one fine screw-up.

And all because of what? Because Pep insisted that he wanted Eto'o off the team that summer. The club was kind of cornered, seeing as this deal with Inter was the only way to offload Samu as well as replace him with the transfer window about to close. That part is understandable, though they played the deal all wrong, letting Inter milk the extra 42 million out of them along with Eto'o. The real issue is, was getting rid of Eto'o worth all of this? Would it have hurt so much to let him stay for one more season? He would have done better than Ibra, the club would have saved a ton of cash, he would have left this summer when his contract would have expired, and then enter Villa.

After just one year on the club, our manager had the chant In Pep we trust on the tongue of every culé, mine included. But even though I love him to death, his persistence about selling Eto'o is something I will never understand.
at 1:40 PM