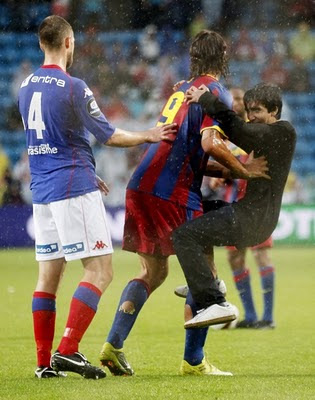 Last night's match was thoroughly pleasing. It was great to see Bojan wear the Captain's badge, to see all the youth players look so promising, and to see the team score four goals in their opening friendly, evenly divided two by two between the B team and the senior squad.

Yes, I'm counting Victor Sanchez as a B-boy until he secures a spot on the first team, like Bo and Pedro and Busi have, and judging by last night's match, that shouldn't be too far off. For once a player actually benefited from a loan-out, I mean, it really seems that Vic's year with Xerez paid off. I always liked him, and I'm glad to see him back and improved. He played a great half and opened up the scoring with what was probably the best goal of the night.
Four goals to two, not bad at all. As expected, Pep traded out the full starting eleven at halftime, putting in a fresh new squad for the second half, most of which were midfielders; the formation changed from 4-3-3 to Ibrahimovic as the solo attacker with five midfielders behind him. An interesting move from Pep, but it seemed to work. Barca's game had a good flow, passing was sharp and the attack was relentless from kickoff to final whistle (in passing, what are everyone's thoughts on Pep's look? Shaved head and full beard? Seemed a bit mis-matched to me).
The defense was a bit shaky at times, especially that moment in the first half when one of our defenders passed to Pinto when an opposition player was too close to him. Pinto tried to dribble past the player (leaving his goal open) then got tackled and lost the ball. If that Valerenga player hadn't been called for fouling Pinto, it would've been a sure goal for his team, and our boys have to watch out for that kind of thing.
Muniesa's defending was pretty good though and in general, the youth players really had a great run. Bojan did a wonderful job of leading the team in the first half too. One youth player that caught my attention is Benja; I'd never seen him play before but damn, he's got a good eye. Great goal in the second half. Jonathan Dos Santos had a fair match and a great shot, but I want to see more from him, that kid could be huge. As for Ibrahimovic, I honestly have to say that his biggest moment was when that pitch invader leapt onto him for a hug. If he's going to be staying, I really hope he'll show that he has more to offer this team.
Adriano made his debut of course, coming on at the half, and he played a strong forty-five minutes. He looked very promising, as did most everyone. I'm looking forward to seeing more and more of the youth players and getting to know them better as the preseason continues... next up is the Asian tour, which will be graced by the presence of Lio Messi and Dani Alves, so let the fun begin.
at 5:22 AM