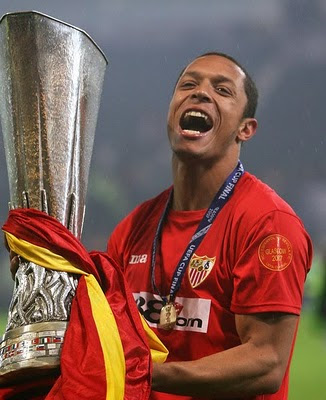 In a surprising but exciting move, Barca have struck up a seemingly out-of-nowhere, 9.5 million euro deal with Sevilla, confirmed on the official site, for the signing of leftback Adriano Correia (ironically, Adriano’s debut for Sevilla was a 0-4 Liga loss to Barcelona in 2005). Only you can’t fairly call him just a leftback, because he’s like, the most super versatile player ever, being indisputably two-footed, able to play on the right or left of the pitch, in defense or midfield or as a winger. Count on Brazil to come out with a player like that! Yes, he’s now the third Brazilian on the team, after Dani Alves and Maxwell. Interestingly enough, all three are fullbacks…

Oops, I said we weren’t going to call him just a fullback. Annoyingly, there isn’t a postion name for the kind of player he is, so I’ll just have to make one up and get back to you later. In the meantime, we can all ponder on the bizzarely ingenius uses Pep will put him to in the coming season.`
at 2:11 PM