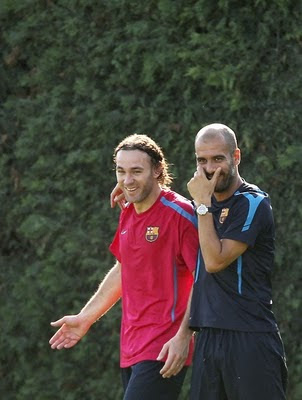 By the looks on Pep's and Gaby's faces, they're just as excited about the Liga fixtures as I am! To think that I'd been counting down the days for these fixtures to come out, and when they do my laptop decides to stop working; my luck. I guess everyone's seen them by now, but anyway...

The fixtures for La Liga have been released, and Barca is set to open up in an away game against Racing Santander on August 29. The first Clasico is at home on November 28, the second, away of course, on April 17. I'm digging those dates because it means that if we can secure the title within six matches of the Liga's end, we go to the Bernuebeu as Champions.

Full fixture list for the Barca's Liga as well as preseason matches is up on the official site.
at 4:45 AM