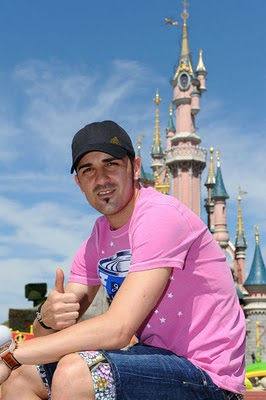 David Villa sends greetings from Disneyland and begs you not to hold his outfit against him. Seriously, what is it with Barca boys and pinks and florals? Perhaps the fuschia training kits do belong here, after all.

So what has David been up to since South Africa? Well, after the Spain national team's welcome gala in Madrid he flew down to his home town Asturias to join his family, and then they all took off to Disneyland, Paris. Reportedly, Villa's daughters had the most fun at the Peter Pan attraction and the Fantillusion ride.

Next he returned to Asturias to attend various tributes from his fans, as well as with the president of the Principality of Asturias, Vicente Álvarez Areces, at his headquarters in Oviedo. Then it was off to the village of Sama de Langreo where, waving from the balcony of the municipal council, he received homage from the city's inhabitants, also spending some time signing autographs at the ParqueAstur Mall.

Tomorrow he's set to appear at the close of his summer camp for kids, the Official Campus David Villa, in the New Ganzabal stadium in Langreo. 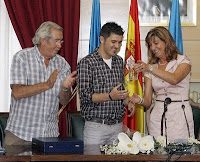