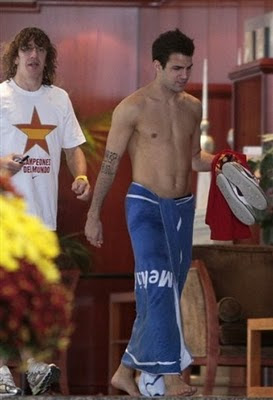 The never-ending Cesc saga has come to an end - for this transfer period at least. We went after him last summer, the chase picked up again this summer, and as sure as there are blue and red stripes on a Barca shirt, we'll be at it again next summer. Buying Cesc is an obsession that Barca has, and honestly, it's not so much we need Cesc as it is we want Cesc. Don't get me wrong, I love the guy and I'd love him to be on the club as much as the next fan - see the wish list on the sidebar to the left. But perhaps this is for the best, and maybe come next summer there will be more need for Cesc on the team.

It's just too bad that in the end, Cesc had to stay on Arsenal against his desire. It was pretty clear that he wanted to come here, but Arsenal weren't very open to negotiation... ah well, Xavi considers him only on loan to Arsenal over the next year, after which he'll definitely join Barca, so let's be as optimistic as he is.
Anyway, the club released their official statement on the matter and so did Cesc, and it's nothing we haven't already heard, and will continue to hear when Cesgate opens up again in a year.
at 2:27 PM