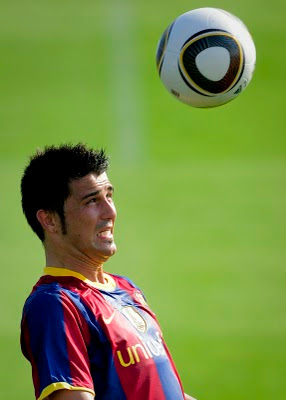 The Barca boys took their official team photo today, with everyone present bar Eric Abidal because he had to respond to disciplinary summons from the French football federation, which sucks; and Alex Hleb because of his contract issues. Apart from that, eight of the B-teamers were included: Oier Olazábal, Rubén Miño, Sergio Gómez, Jonathan dos Santos, Thiago Alcántara, Oriol Romeu, Víctor Vázquez, Andreu Fontàs. Pictures from the event at the official site.

The man-of-the-moment David Villa appeared to be working hard as the players continued their training session in the home match kits instead of switching to training tops, and since I generally judge training sessions by Pep's expression, it seems this one went pretty well. 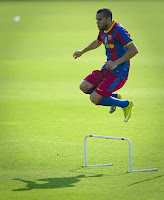 Email ThisBlogThis!Share to TwitterShare to FacebookShare to Pinterest
Labels: Training