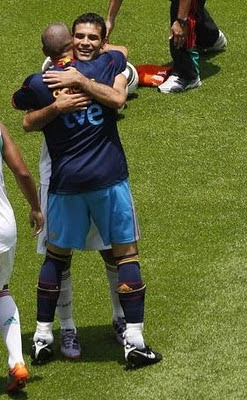 The called-up Barca boys all came out intact from the string of international freindlies; the results:

Spain 1-1 Mexico: Villa stayed on the bench while the six remaining Barca boys played for Spaoin, some for more time than others:
Busquets: 1 hour
Puyol: 1st half
Valdes: 2nd half
Xavi: 30 minutes
Pique: 25 minutes
Pedro: 20 minutes
Victor Valdes got to hug ex-Barca boy Rafa Marquez who got booked for fouling Busi, and Xavi assisted the equalizing goal by David Silva in the loss time.
Ireland 0-1 Argentina: Messi played for Argentina for 1 hour
USA 0-2 Brazil: Dani Alves played for Brazil for the whole game
Sweden 3-0 Scotland: Ibrahimovic played for Sweden for 1 hour and scored the first goal.

Lithuania 0-2 Belarus: Hleb played for Belarus for the 1st half.
Angola 0-2 Uruguay: Caceres didn't play for Uruguay
Finland U21 1-1 Spain U21: Bojan and Jeffren played whole game and Bojan scored the equalizing goal from a penalty
All the players are due back in Barcelona for tonight's training session, except for Bojan and Jeffren who will be back tomorrow.
at 7:35 AM