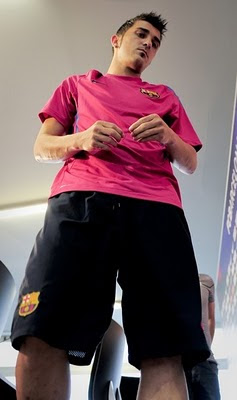 I think David Villa pulls off this fuschia top better than anyone on the squad. Maybe it's the fact that he's no stranger to pink shirts, or maybe I'm finally getting used to the flashy contraption.
.
Anyway, this is him at a press conference at the Joan Gamper sporting complex two days ago, where he declared that he's able to play alongside Ibrahimovic:
"I am compatible with Ibrahimovic. Totally. In football there is nothing incompatible and less so with such quality players like him. I know we have a great squad and the quality to win it all."
He also talked about his excitement and readiness to play for Barcelona:
"I will give my best in every training session to be 100 per cent but it's not me who decides. I hope to soon be at 100 per cent and make my debut. The team will need goals and that's my job. With daily work and the help of my colleagues I hope to score the maximum possible."

"Being on the field is where I feel most comfortable. Many times I have dreamed of my debut for Barcelona. Since being introduced as a Barcelona player I have wanted to fulfill the dream of playing for the team and hopefully it comes as soon as possible."
That makes two of us then.
.