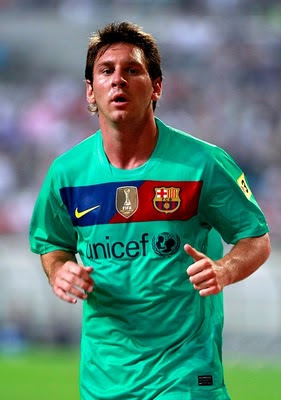 I guess the lack of updates lately is enough to show how busy I've been and I'm sorry for that; again, bear with me until the summer is over. I wasn't even able to watch Barca's match yesterday against the K-League all-stars, but here are some thoughts nonetheless...

First of all, I think it's time to talk about this season's kits. This mint-green thing, I can't absorb it. It's like the worst away kit we've had since that beige contraption of 2002-2003, and while we're on the subject, I wasn't too impressed with this season's home kit either. But nothing tops the zebra sleeves on the keeper's kit (which is also way too baggy). Add the fuschia training kits to the list, and it's easy to say: Nike has issues.

Lio played fifteen minutes and would have played none if Pep wasn't going to be fined for it for stupid reasons. Nothing is more important than Lio's fitness, and making him play after he's had no more than a single training session isn't exactly safe. But all's well that ends well and Lio is fine, plus he scored two goals in the measly minutes that he played and was named Man of the Match. It still blows me away at times how incredible a player he is.

I see that Sanchez scord again, which is very promising. I hope he won't be sold as has been rumoured; it's clear how much he has improved over the last year, and is showing that he deserves a shot with the first team.

What do you know, Ibrahimovic scored! I hear he was named the most competitive player of the match, and that goal has to count for something right? Maybe he will be able to fit in more with the team as the season progresses. Then again, current reports suggest that he just offered himself to AC Milan.

It's also great to see that the B-team players are doing their share and that Soriano was able to score. 5-2, it's an excellent result; Barca's preseason is looking great so far, and things will only get better once the Spaniards return.
at 5:00 AM