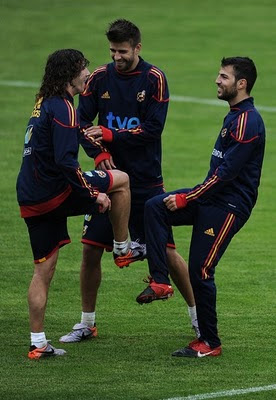 Transfer rumors usually bore the hell of me, but it's probably best not to bother with excuses for the lack of updates lately and just get on with it.

Besides, we've entered the final week of the summer transfer period and you know what that means: the chance for the press to come out with the the most ridiculous, out-of-nowhere speculations they've probably been devising all summer long in preparation for this week.

The only time they're busier is during the last month of the season when when they're scurrying to keep up with finals and trophies and celebration scandals; so without further ado let the dish begin.

Look at us, thinking that the Cesc Fabregas drama was over for this summer. The media have certainly made fools of us all, because lo and behold, Cesc has declared his devotion to Catalunya in an open act of treason against Wenger, and awaits his rescue from the dungeons of Emirates Stadium where he's been confined. Rest assured that Pique and Puyol are on it and plan to kidnap him and bring him home; before the week is out Cesc will be carving his name with the sword of Saint Jordi into the grass on Camp Nou.

Also, he'll most likely be joined by Liverpool's Javier Mascherano in no time, seeing as Javier, in collaboration with Victor Valdes, has devised in ingenious plan involving a playing/hunger strike to make his club consent to selling him to Barca - apparently Rosell slipped something into Pep's morning cereal to make him change his mind about back-up signings.

Because we can totally afford more signings now that Ibrahimovic is leaving. Didn't y'all hear? He had a slumber party with Galliani and amidst painting each other's nails, they agreed all the personal terms for his switch to AC Milan and are now taking his kit measurements. Meanwhile, the circle completes itself as Gerard Pique consoles himself over Ibra's departure by reserving the locker beside his own for Cesc.

In the next few days you can expect Galliani to throw half of Milan's players into the Ibra offer, while Manchester City prepare a 200 million euro offer for Messi and Pep challeges Wenger to a jousting match in which Cesc is the prize. Until then, everyone's invited to Villa's debut party where you'll get the chance to be drenched in cava by a certain blue-eyed Catalan who also doubles as the DJ.
at 3:34 PM