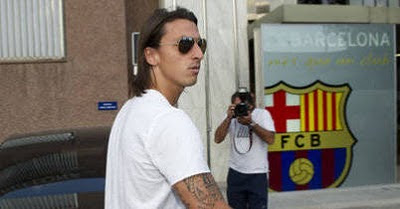 Zlatan Ibrahimovic has officially signed for AC Milan, after he, Raiola, Rosell and Galliani have been wrapped up in the final negotiations at Camp Nou all evening. The deal is worth twenty five million (to be paid over three years) which is what - a quarter? a third? somewhere in between? - of what we actually paid for him. The club's negotiation skills could use some sharpening, no doubt.
The agreement is that Zlatan will be on loan for the first year, with an obligation to buy next summer. His salary is reported to be eight million a year over the agreed four year period. Ibrahimovic's mood has seemingly brightened now his deal has been made, as he was cracking jokes about the meeting: "I'm here to sign my new Barça contract, ask Guardiola about it." Cute.
His new contract was drawn up by Milan lawyer Leandro Cantamessa and speedily delivered to Camp Nou, where he wasted no time in putting pen to paper and tying himself to the Italian club for the next four years. There was some debate as to whether the news would be announced by Galliani and Ibrahimovic at the Camp Nou or by Berlusconi who happened to be at the Milanello sports center, before deciding on Barcelona.
The four emerged from Camp Nou to face the press, and Ibra talked:
"I'm very happy because I'm joining one of the best clubs of the world."
"Since the coach didn't want me, this is the best solution. To know what the problem was, you should talk with the coach. I don't know it."
"Now I want to will all trophies with Milan."
Then he and Galliani hopped into his car and drove away.
He's set to arrive at the Linate airport in Milan in a private plane at 12:30, meet with his new teammates and coach before giving a press conference at the San Siro stadium at 19:45, then be presented 15 minutes before the Milan's league game against Lecce. Bit funny, isn't it, that he already signed the contract and is going to be presented, all before he even takes his physical, which is set for Monday?
.
Official statements:
.
FC Barcelona
AC Milan
Huge thanks to Pep of barcastuff for tweeting live updates of the events as they went down!
at 3:09 PM