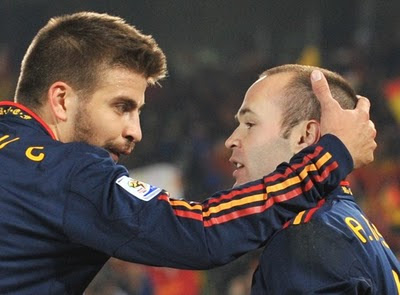 There's something about Andres Iniesta's head that makes Gerard Pique continually want to grab it. Maybe it's the fact that Andres' height with respect to Gerard's makes him a convenient armrest; in any case, check this out.

And speaking of those two, they each had some interesting things to say in mid-vacation interviews they did, like Iniesta's comment on his infamous Sardinia swimsuit:
"It seems that a lot of people didn’t like [my swimsuit]. The truth is, it’s lovely." [more here]
How he associates that thing with the word lovely is beyond me. Moving on, here's what Pique had to say concerning this photo of him and Ibrahimovic:
"It was a photo that was misinterpreted, of course. I suppose there was morbid curiosity, but in the end, there was nothing going on. Gay Pride Day? Well I don’t know, to tell you the truth. When was it?" [more here]
See, he isn't into Ibra at all; obviously he was inquiring about Gay Pride Day with Cesc on his mind.
at 4:40 AM