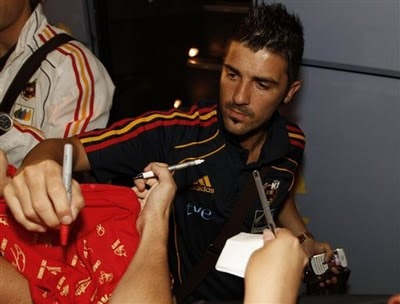 Barca's squad is certainly suffering right now, as almost all the players are off to join their national teams:

- Victor Valdes, Gerard Pique, Carles Puyol, Xavi Hernandez, Sergio Busquets, David Villa, Pedro: Spain (vs Mexico)
- Dani Alves: Brazil (vs USA)
- Lionel Messi: Argentina (vs Ireland)
- Zlatan Ibrahimovic: Sweden (vs Scotland)
Returning loan-outs:
- Alex Hleb: Belarus (vs Lithuania)
- Martin Caceres: Uruguay (vs Angola)
UEFA U-21 Championship:
- Bojan Krkic, Jeffren Suarez: Spain (fixtures here)
This can't be good for the Barca's Spaniards since they join their national team straight from vacation, but word is that they will only play fifteen minutes of the game. Elsewhere, Eric Abidal is left out of France's squad to face Norway as is Keita from Mali's squad to face Guinea, and Jonathan Dos Santos is pardoned from joining Mexico against Spain.
That leaves Pinto, Maxwell, Abidal, Adriano, Milito, Keita, and Iniesta as well as Victor Sanchez, Jonny Dos Santos and the rest of the B-team boys on Barca's squad. Sounds fabulous, no?
at 6:51 AM